I'll distract the file clerk. Apparently he's really into bird-watching, so talking to a woman should blow his mind. And talking to this woman? It could kill him.

Long time, no blog.  Something to do with the summer holidays, going on holiday (Greece, and lovely, thanks for asking) (no, there was tonnes of money, and the cashpoints worked) (no, no riots in Stoupa, and Athens was a hot shithole, but I suspect it always was), the NASENCO course essay being due in September (nearly 2500 words, thanks for asking) and general STUFF and THINGS happening.  The children are away, and I am missing them a great deal, but also really appreciative of the time without them, particularly on Sunday morning after drinking my body weight in gin the night before.  I passed out in my clothes.  It was not good.

I'm supposed to be going for a run now, but my phone is nearly out of battery and I need to charge it before I go out otherwise I will get in a real snit about not having music, so what better thing to do than update you on all the fascinating KNITTING and SEWING TOGETHER CROCHETED SQUARES that I've been doing.


The list for this Year of Projects is substantially the same as it was when created.  Quelle surprise, so I'm only going to talk about what I have done, rather than what I will be doing.  If you are massively into lists, you can see the whole thing in all its glory here.

Petrie top in Yellow Wool Cotton from Liberty - I've started this.  I used some of the blue wool from my Vianne as a hem facing, and with the yellow of the main body of the top, it looks like a minion.

I might rip it back.  I have to have a long think about it.

Finish the Vianne in time for the end of the Outfit Along - well, I've got the buttonband to do on this one.  I need to use slightly smaller needles for the band, so it's got that sewn on look I like.  I have made mistake after mistake with this one, honestly.  I buggered up the lace, lost my DPNs, ran out of wool half way down the first sleeve; you never stop making mistakes, you just make them faster and more irreparably.

Elwood mittens for Lucy - I've made one.  Look! 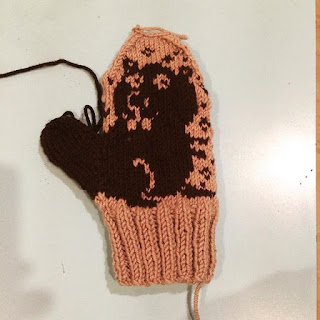 Cute, isn't it?  Lucy loves it, which is the main thing.  I've trimmed the ends now, and started the ribbing on the second one.  That's the problem with knitting mittens and socks, the idea of making the same thing twice when there's already a perfectly wearable garment in existence.

More soon.  And some sewing.  I will finish this essay in time to sew something before the girls come back.  Right.  Running time.  Yay.
Posted by Unknown at 19:34

Things to Look At