The amazing sore bums of Ealing

I need a new bike.

While the kids are away in Dartmoor, we have been making the most of our child free time, and went  on a really long bike rides, because that's the sort of cool people we are.  We cycled down to church (waterfowl count: 0) (distance: 2km), hung around there for a bit serving tea and biscuits, then decided to go to Isleworth to see if Halfords was open for me to test drive my new bike.  I want a mint green Pendleton bike, with a basket and space for panniers and a bell, and I can apparently get one through work, although first I have to navigate Ealing's opaque cycle to work scheme website.  Seriously. 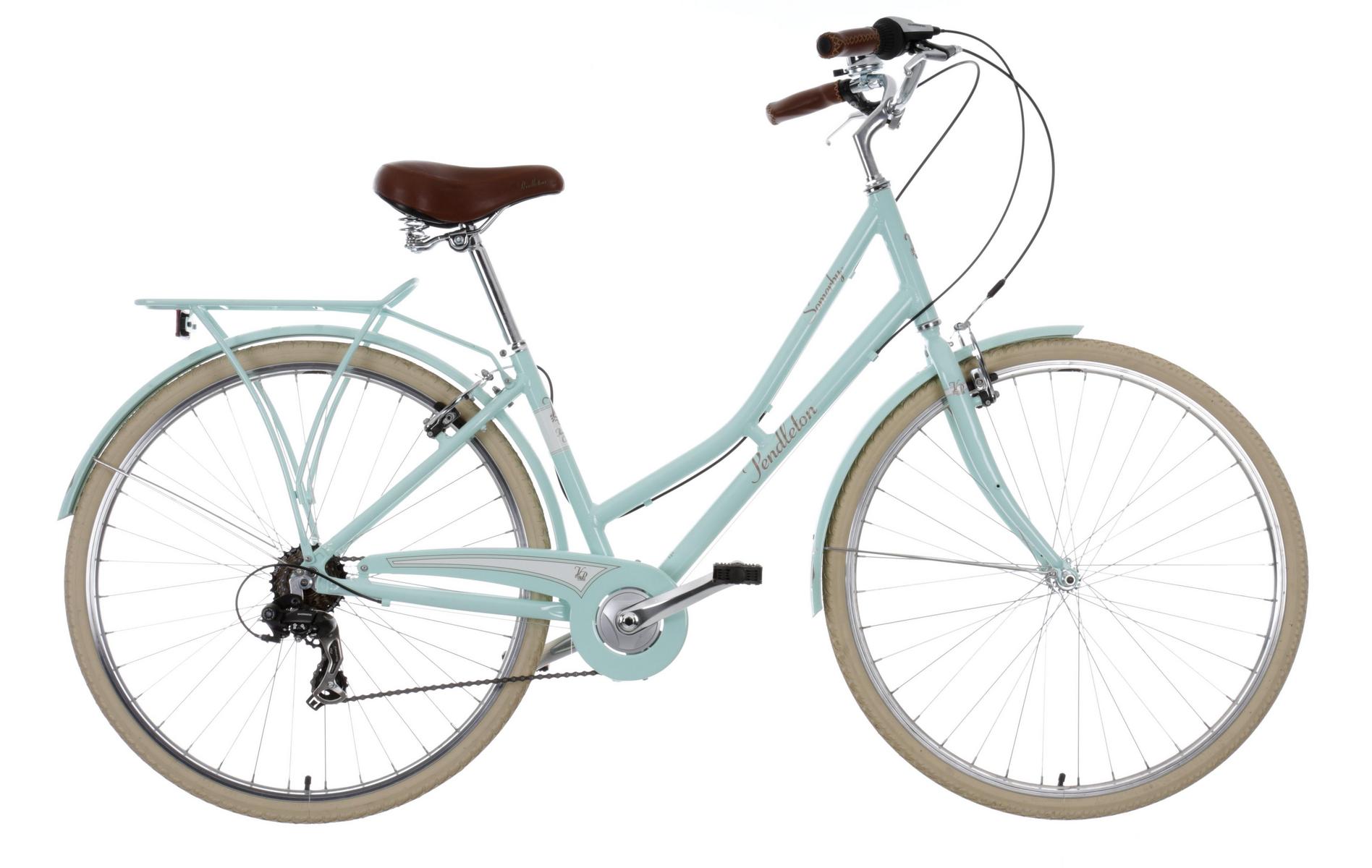 Our church is in Hanwell, which mean little to non-Ealing based readers, and right by the Bunny Park, which is on the Brent River, which has a cycle path along side.  So we cycled down there (waterfowl count: some moorhens and some coots) until we hit the Grand Union Canal, and then down to Brentford.  (waterfowl count: many moorhens, many coots, one heron)  From Brentford, we went through Syon Park, along the river and all the way to Isleworth. (waterfowl count: lots of seagulls) (distance: 9.5km)

Anyway, I sat on the bike, rode around the shop, had a fun time arguing with my husband about how many panniers I need, then we went to Richmond.  I do not like Richmond.  It is full of people wearing Fat Face and red trousers and braying and that makes me irrationally angry, so we did not stay in Richmond very long.  (waterfowl count: most seagulls and IDIOTS) (distance: 3.52)  We cycled back to Kew, again along the Thames, on a very, very bumpy, narrow path, with lots of people and nettles and thistles and things.  (distance: 6km)(waterfowl count: don't know, too busy avoiding joggers, dogs and other cyclists)

Kew is not quite as ghastly as Richmond, but it does have its share of idiots, although by this stage, I was really hungry and just a bit grumpy, and after the third rejected pub, I suggested that we just go and GET A SANDWICH FROM SAINSBURYS HURRY UP I AM STARVING, but we went to the pub on Kew Green and it was lovely, and I had a vegetarian Wellington thing, which is something I want to make now - it looked really easy, roasted veg in pasty, what's hard about that?  Famous last words?  (waterfowl count: a family of swans including teenage cygnets)

So then I made the cardinal error of looking at my Runkeeper statistics for the month, and by walking, running and cycling, I'd managed to cover 177 km, so obviously we had to cycle home along the canal the long way.  Turns out the long way is a very, very long way, and now my bum is really quite sore.  I think I'll be adding a pair of padded cycling shorts to my order when I buy my bike, and I really need to wear a sports bra when cycling on rough ground.  That would have been a very severe wardrobe malfunction.  (waterfowl count: at least 50 swans including some on their own (sob), two families with teenagers and two groups of at least 15 adults, tiny baby mallards with their mum, baby coots (so cute), baby moorhens (cute and so ugly), four herons, one flying cormorant)(distance: 25.5 km)

Where did you go?


Many weeks later, and now it is the summer holidays, the children are away, work is but a happy, middle of the night screaming memory, and we have been to Austria and back again.

There has been all sorts happening: knitting, sewing, running, cycling, drinking gin, making jam, baking bread.  I contributed to the now traditional Outfit Along run by Andi Sutterland and Lauren Lladybird, which involved making a skirt and a cardigan, and a white tee-shirt. 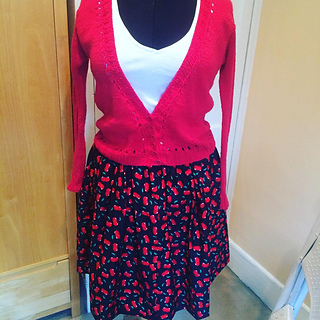 The tee shirt is a Grainline Lark, with a lower v-neck, and cut in a smaller size, which is terrific, the skirt is a "self-drafted" one, where I had about two metres of the cherry fabric, and just wrapped it around my body, gathered the rectangles and shoved a waistband on it with a zip and a button.  I'm calling that a first design, obv.

Not much to say about the cardigan, except it's my third version of the Myrna pattern, and this time has no keyhole.  I altered the design to suit my personality and the v is much deeper than originally written, but it closes over my tummy and doesn't look too indecent, so I'm pleased with it.  Replicating my design change on the left side was a bit challenging, mind.  I wore this outfit to travel to Austria, with my red clogs, and it was very comfy and lovely.  It got a bit sweaty in the cardigan in Vienna, as it was pretty hot, much hotter than here, but I wore it a few times, especially in the evening.  I do really like it, and I've started yet another Myrna, this time in a lovely dark purple.

I've made some other things, and as it's the school holidays, I might even be able to blog about them.  Who can say?

Do not wait to strike till the iron is hot; but make it hot by striking

For those who wonder why I was on strike today.

This is not an "open letter", I have actually printed this out, signed it and sent it to Ms Morgan, via my MP.

I am on strike today, 5th July, along with countless others from my union. We are all professionals with a passionate belief in excellent, creative, stimulating and fulfilling education for the children in our care, and the decision today was not taken lightly or maliciously. It behoves you, as a fellow professional woman, not to present us as trouble makers out to disrupt children’s education; we are not choosing “a path of disruption over negotiation and discussion.”

While I am not obliged to lay out my reasons for striking to you or anyone else, I have thought very hard about this decision.

I am strongly against the forced academisation of schools. I believe that letting private companies with their own agenda run education will lead to a decrease of opportunities for children, as those who do not conform to the agenda will be excluded and marginalised.

Children should not be taught by unqualified teachers. This is a self evident truth.

Children as young as four are not failing. Children as young as seven should not be in tears at school because they are forced to sit in silence to do work that we were not able to adequately prepare them for – the sample SATs papers were not sufficiently similar to the SATs tests administered in May, especially in Key Stage 2. Children going to High School should not be expected to resit tests that they have “failed”. This is a waste of time.

Data released today shows that nearly half of 11 year olds in this country have failed to achieve the expected standard. I cannot believe that this is due to a failure in teaching; the assessments have been far too difficult, and the moving of the bar has been unfair, especially as the current Year 6 have only had one year of the new, much more demanding curriculum, yet were expected to take tests based on learning that would have happened across their four years in Key Stage 2. The political decision to do this suggests that the government are keen to follow the “path of disruption”; determined to show that schools are failing children, and therefore need to be forced to become academies in order to “improve”.

Children as young as seven are experiencing severe stress, and there has been a huge increase in mental health problems in young children. Since September, I have personally recommended referrals to CAMHS of 4 children, all under ten, and am aware of many others in my school who are suffering from anxiety and stress, much of which can be laid at the door of the increased pressure from considerably harder assessments; assessments that are coming at younger ages.

The assessment requirement of “total coverage” has been discriminatory to children with Special Educational Needs and Disabilities. The spelling requirement means that children with dyslexia will never be able to work at the expected level, and children who do not have the motor control at seven to join their letters will also not be able to work at the expected level; is this really the path we are going down? Your government put in place a wonderful new Code of Practice; this requirement absolutely undermines it and destroys much of the good work you have done.

In real terms, funding has been cut. I am a governor at my school and have passed a very tight budget this year; we are also having to make tough staffing decisions. The Institute of Fiscal Studies in October last year published a report stating that they forecast that school spending per pupil is likely to fall by 8% in real terms, taking into account the increased employer contributions to National Insurance and pensions, as well as a pay settlement of 1%. Having heard you on the Today programme this morning, I am aware that you do not accept this to be a true picture of schools, but I can assure you that it is. I am aware that you speak to school leaders; I would suggest that you need to speak with school leaders who do not share your political views and might provide you with a different picture.

I hope that you will listen to what teachers, head teachers, school support staff, academics and economists are telling you; we are as deeply concerned about the state of education as you are and would be devastated to see it destroyed by policies that can be reversed.
Posted by Unknown at 13:19 No comments:

Things to Look At